The MNIST is a dataset of handwritten digits, including 0 to 9 digits. There are two ways to download the datasets, the first is to convert the files into images by  following the instructions of the website ( http://yann.lecun.com/exdb/mnist/). The second is download the datasets through kaggle(https://www.kaggle.com/, three tested dataset for references is listed in the following Table 1-1.

Nvidia digits dataset puts images in different folders to classify them. Take MNIST for example, the images which represent 0 to 9 will be classified to the corresponding folders, as shown in Figure 1-1.

The format of images in the dataset must be one of image/jpeg and image/png, the size difference with the training model listed in Table 1-2.

Take MNIST for example, the size should be 28x28 and grayscale as Figure 1-2. 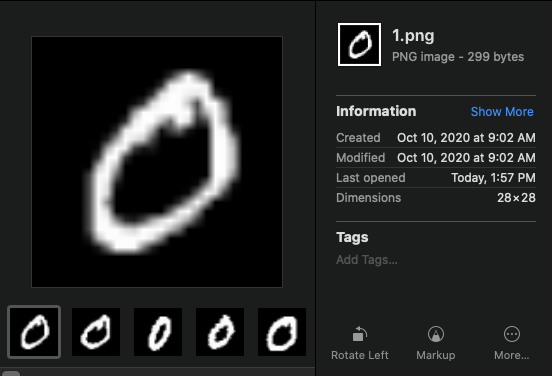 The following instructions will be based on the second method in the chapter Dataset source to download dataset from kaggle, and explain the operations from download datasets to put the datasets into corresponding folders.

First, open a new tab in the browser, insert the url with the row of Table 1-2 ( https://www.kaggle.com/prokaggler/mnistpng), and the webpage will display as Figure 1-3. 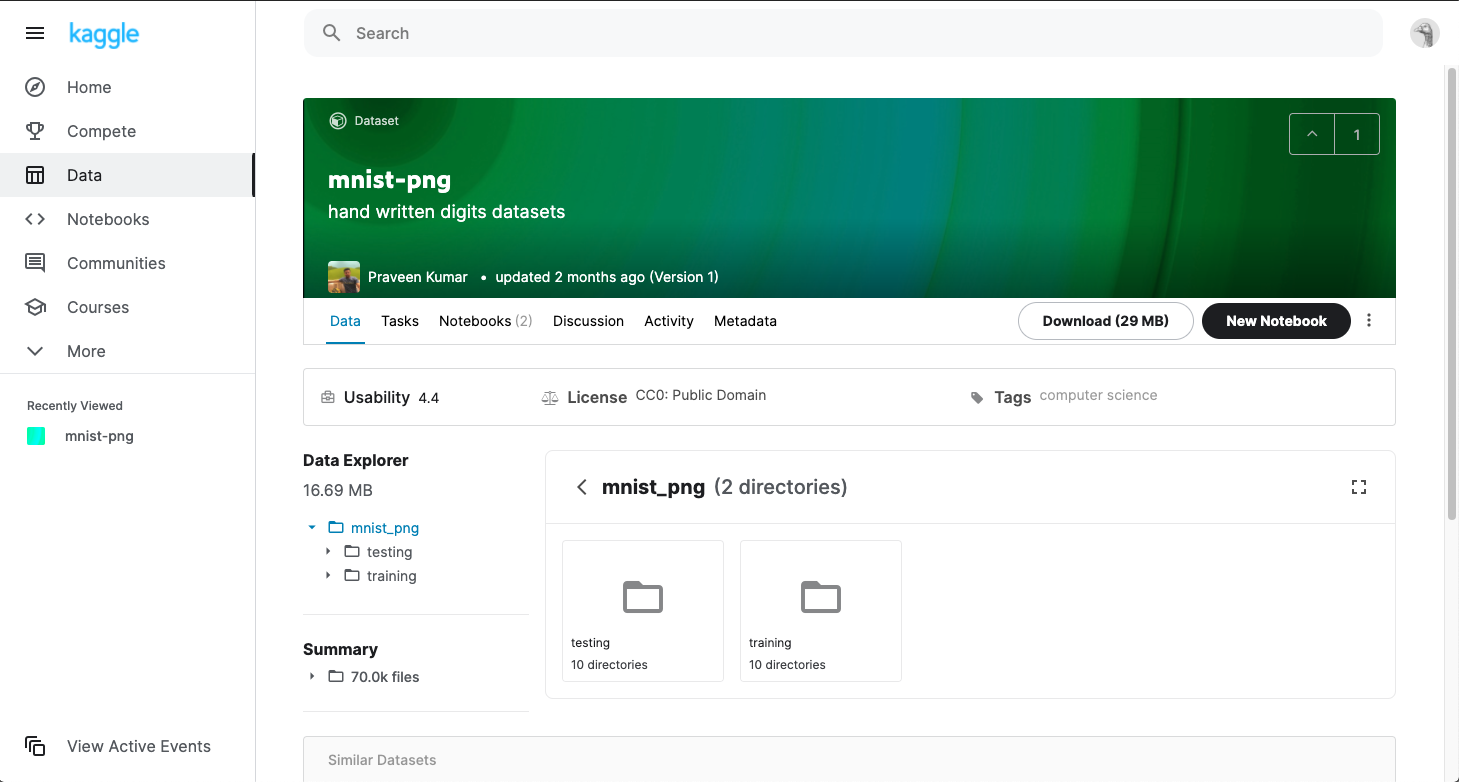 As shown in Figure 1-4, there is a button with Download(17MB) in the right above corner of the webpage. A downloading file named archive.zip will display in the left bottom of the page if the browser is Google Chrome. Training dataset and testing dataset is included in the archive.zip. 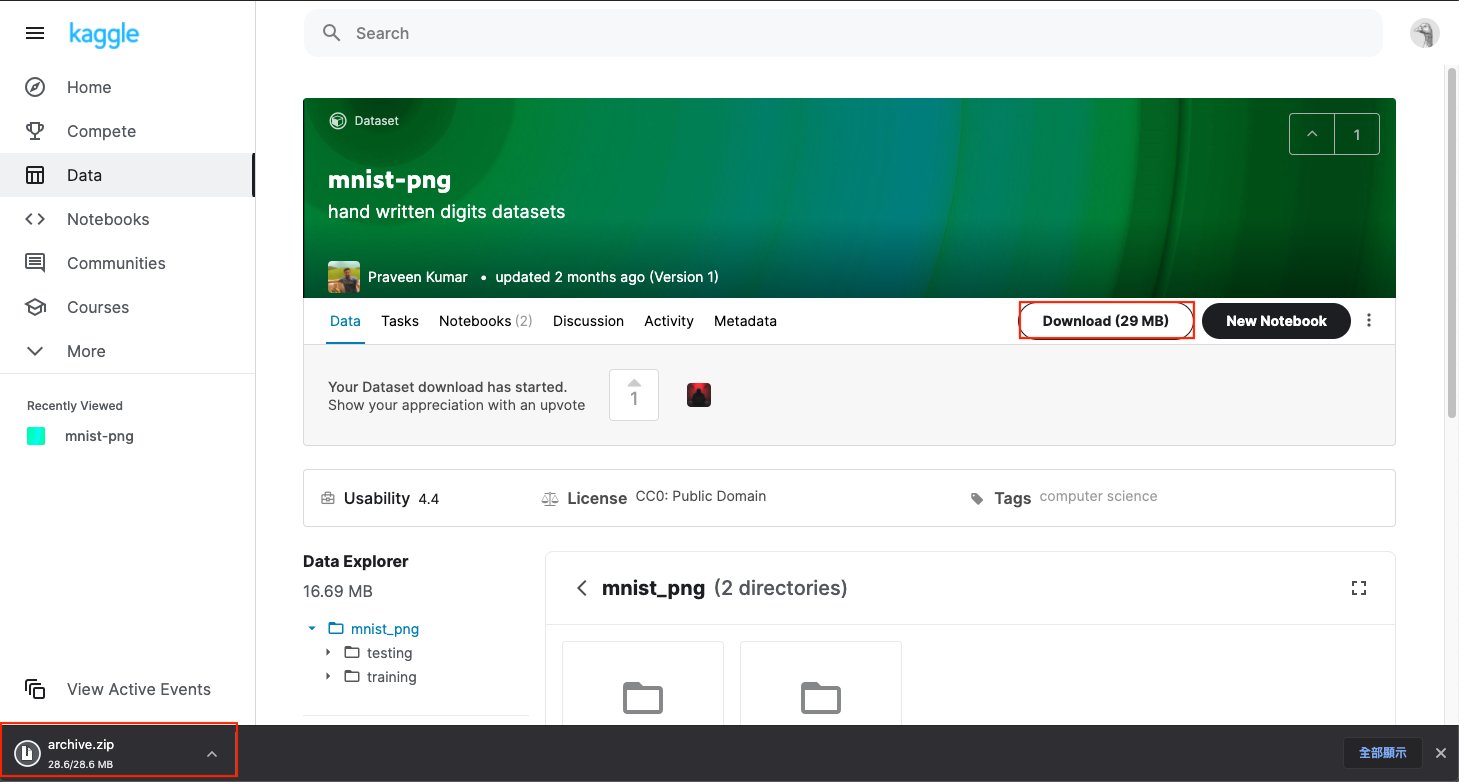 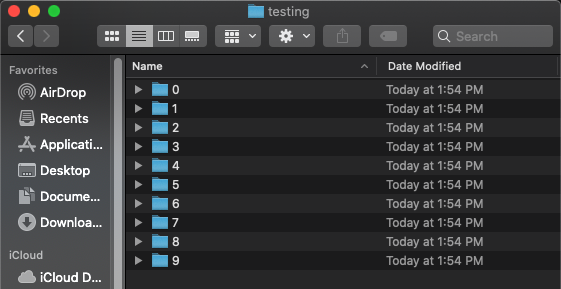 At last, for the use of loading datasets, copy the training and testing folder to the data folder mentioned in chapter Nvidia digits dataset, as shown in Figure 1-8.

Click on the Datasets tab in the Home page and after clicking on the Images button on the right side of the page, then choose the Classification, as shown in the Figure 3-1 and Figure 3-2 respectively.

The browser will turn into the login page, if you have not logged in yet. Insert any user name as you want, the login page is for recognizing the owner of the datasets or the models only, as shown in Figure 3-3.

Start from the left block to choose the related information of the dataset, as the description in the chapter Dataset, the Image Type is Grayscale and the Image Size is 28x28, take Figure 3-4 for reference. 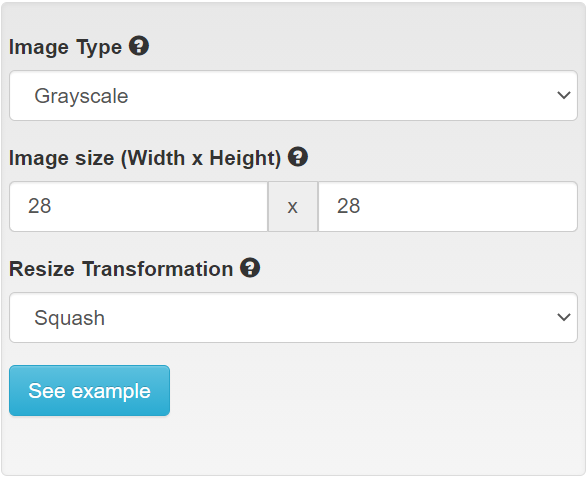 The last is the block below, DB Backend and Image Encoding can be set according to the different requirements, and the Group Name is optional and Dataset Name is required to be set on the loading dataset, starts to load the dataset after clicking on the Create button.

In the MNIST case, as shown in Figure 3-6, DB Backend is LMDB, Image Encoding is PNG and Dataset Name is mnist. 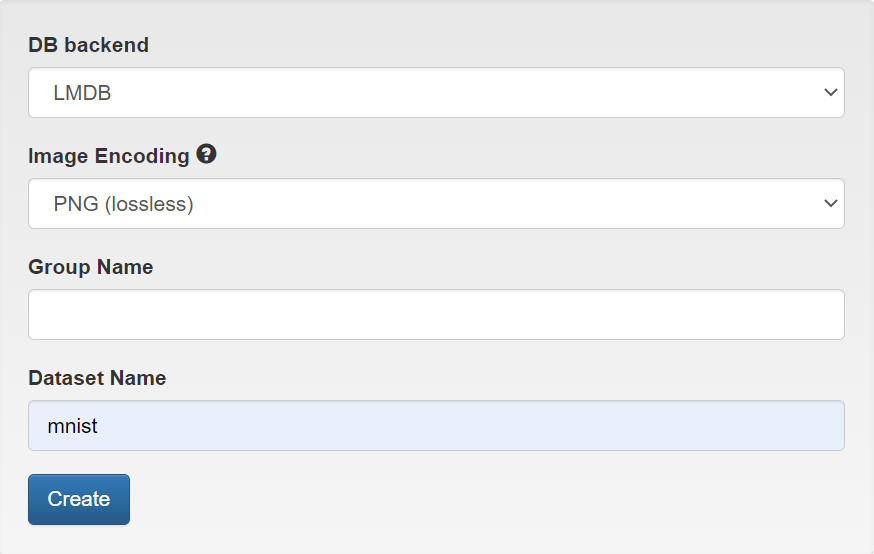 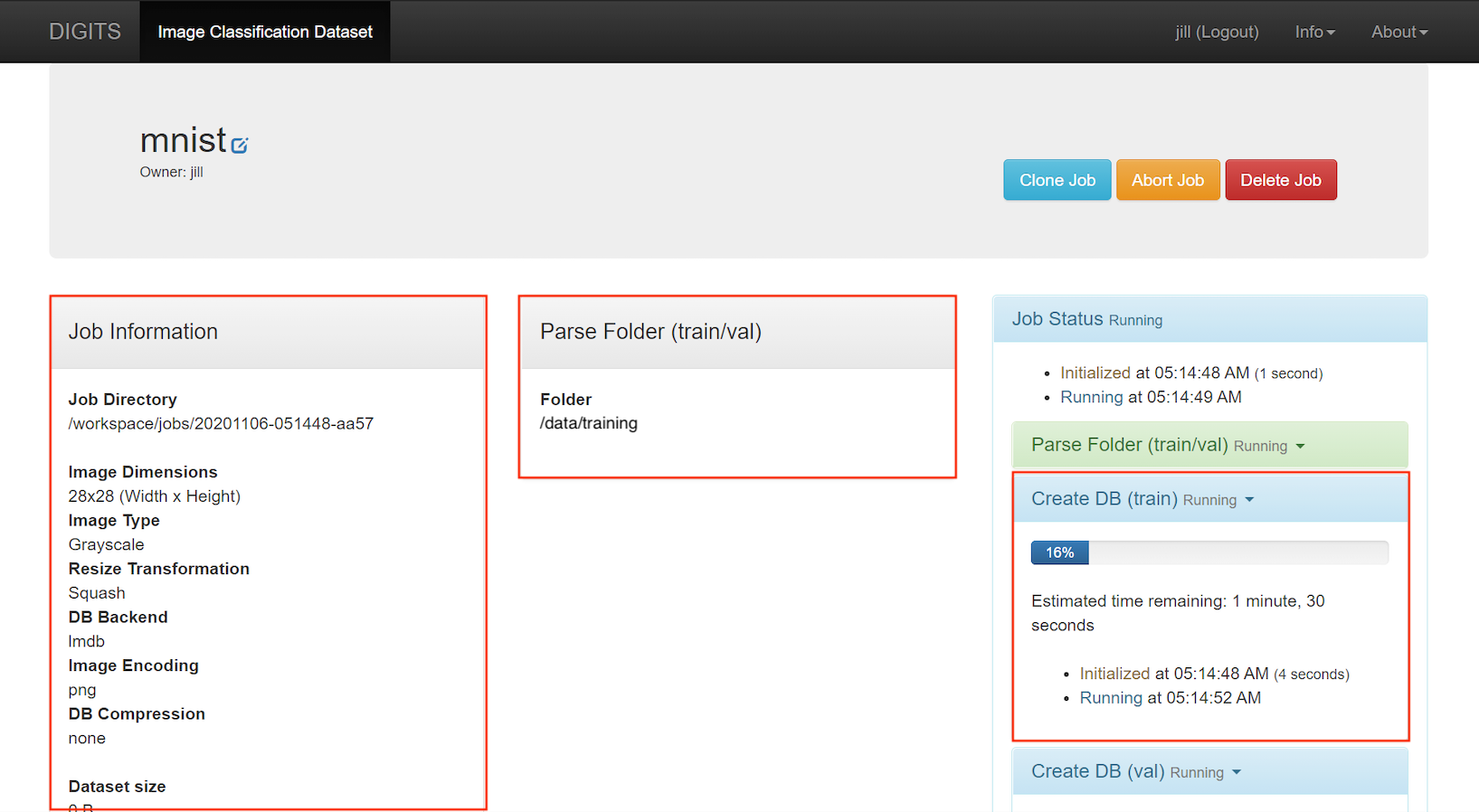 Besides, please download the train.txt and val.txt under Input File (before shuffling) in each bar graph, for the use of testing trained models. 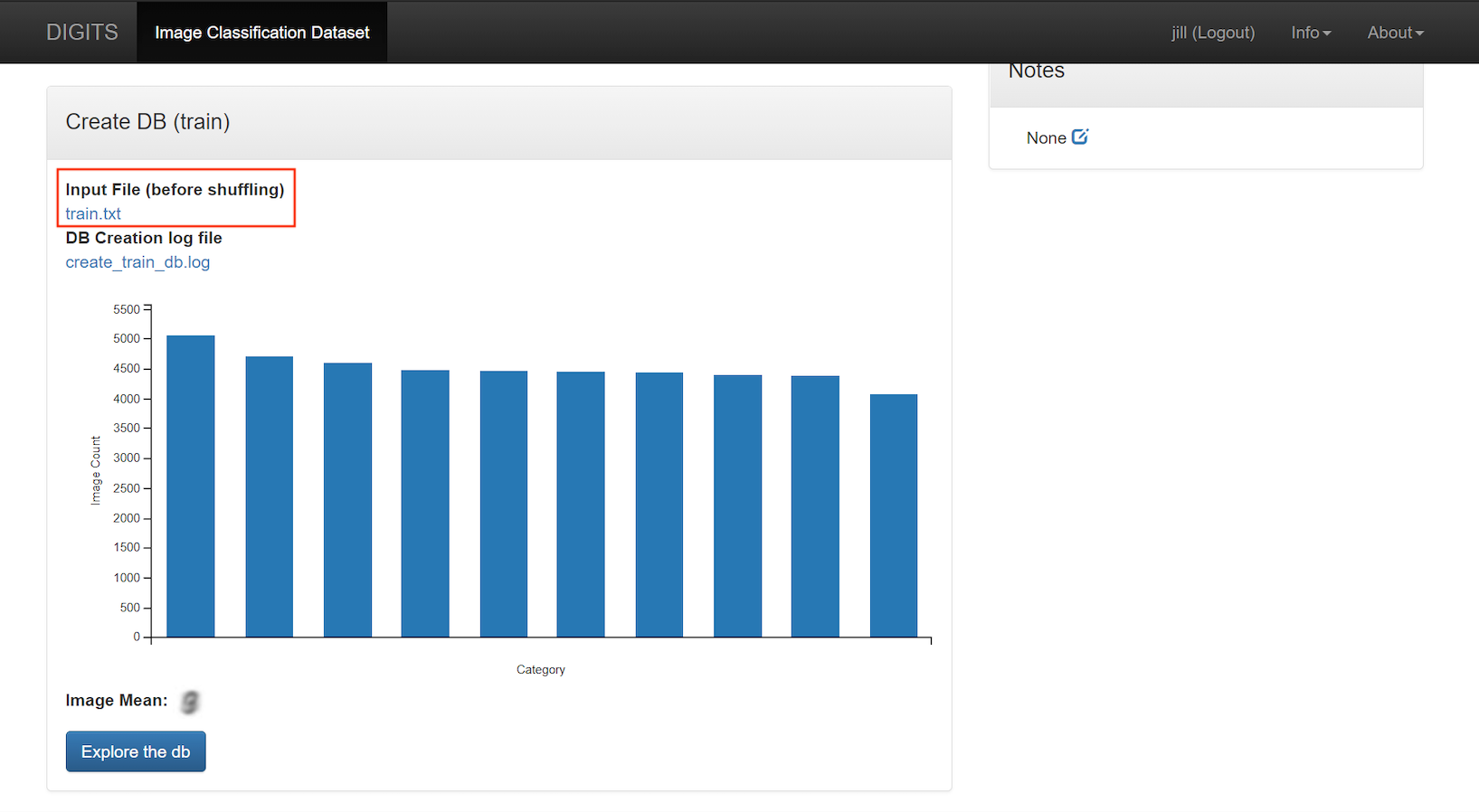 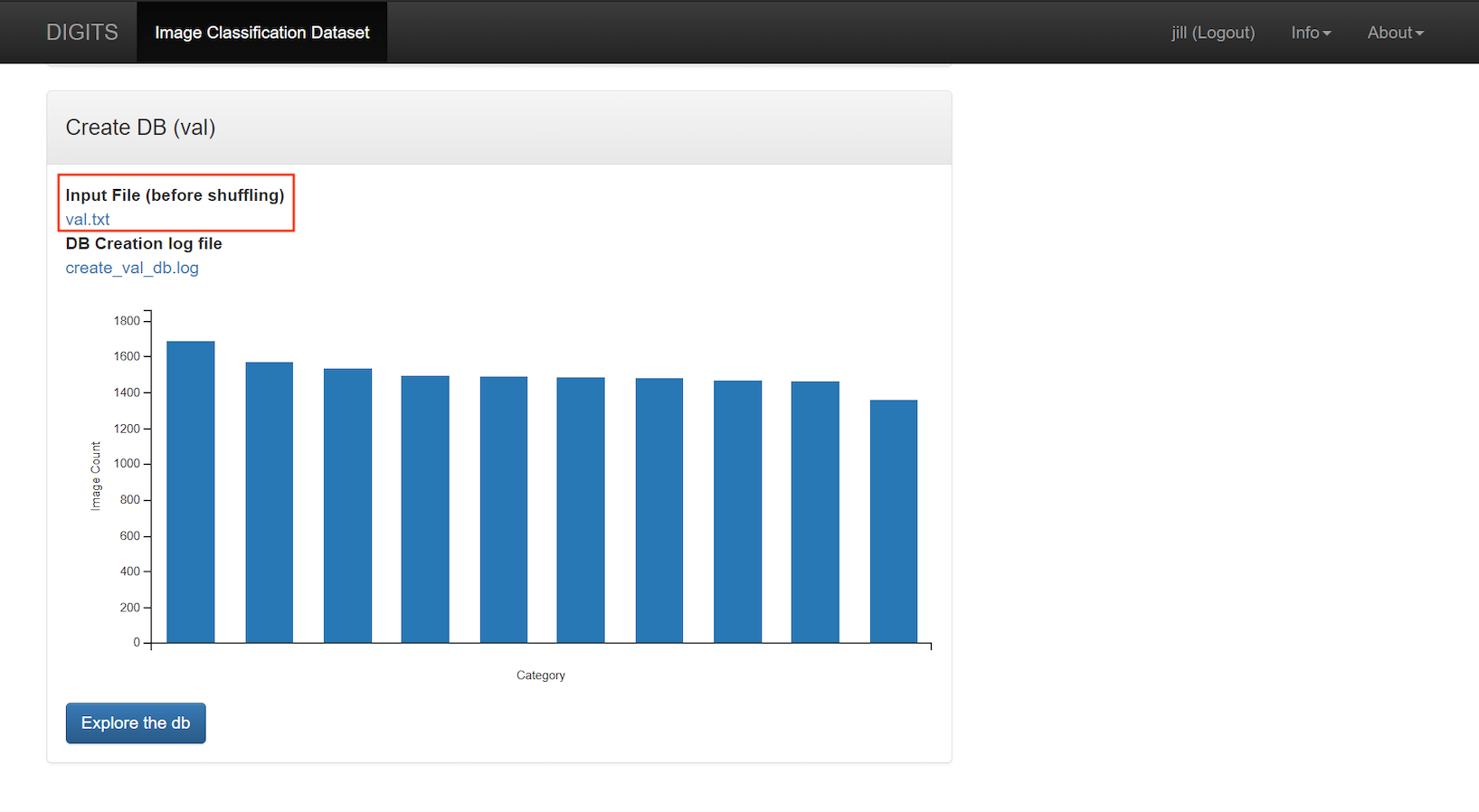 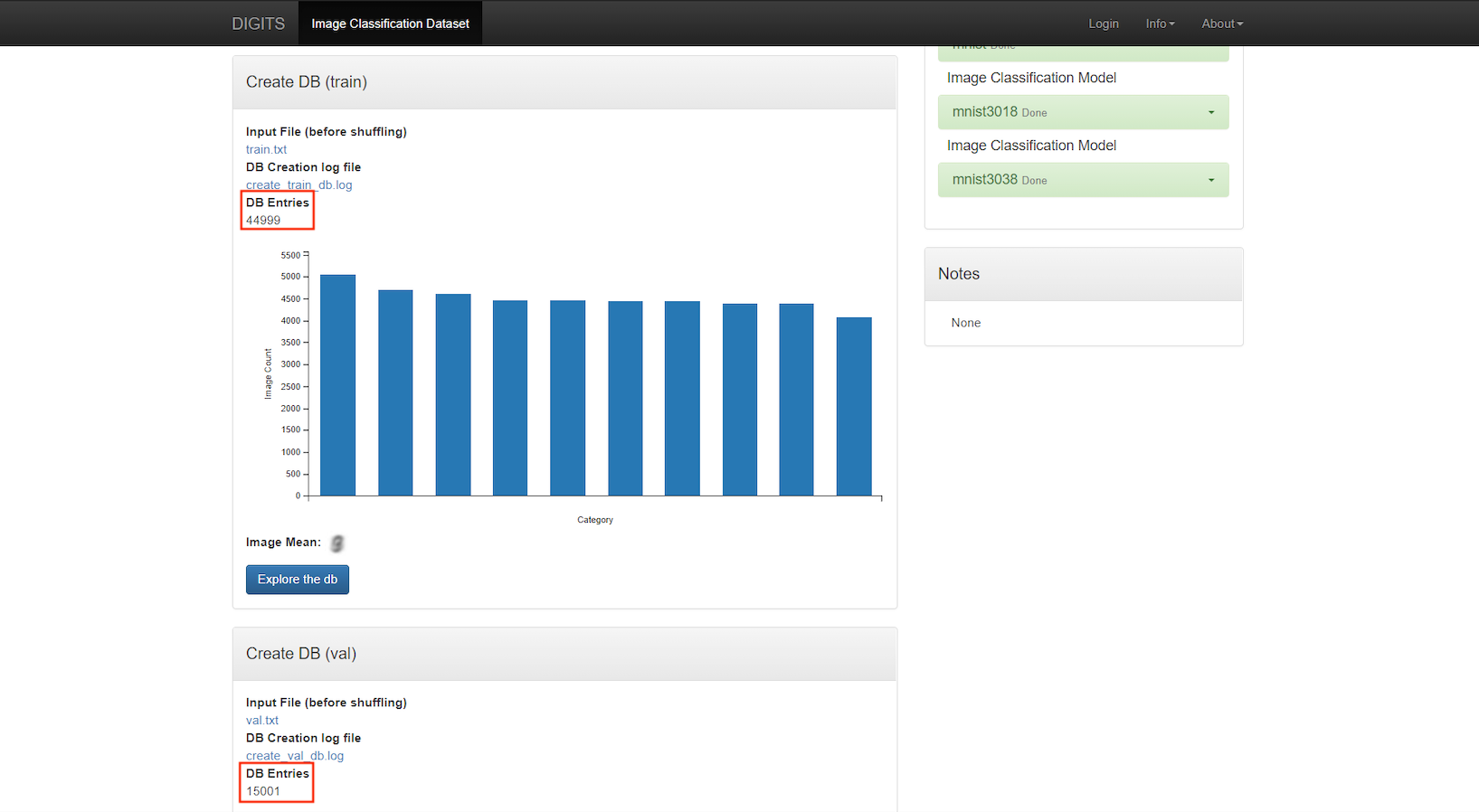 Back to the home page by clicking on DIGITS in the upper left of the webpage, the loaded dataset will display in the tab Datasets, as shown in Figure 3-11.

As shown in Figure 4-1 and Figure 4-2, click on the tab Models in the home page. Click on the drop-down button Images in the right of the page, start to train the model by clicking on the Classification.

It will turn to a new page after clicking on the Classification, as shown in the Figure 4-3. Choose the dataset to train the model in the left block, and the different settings for the training model can be set in the middle and right block. The MNIST example uses the default value for the training model. 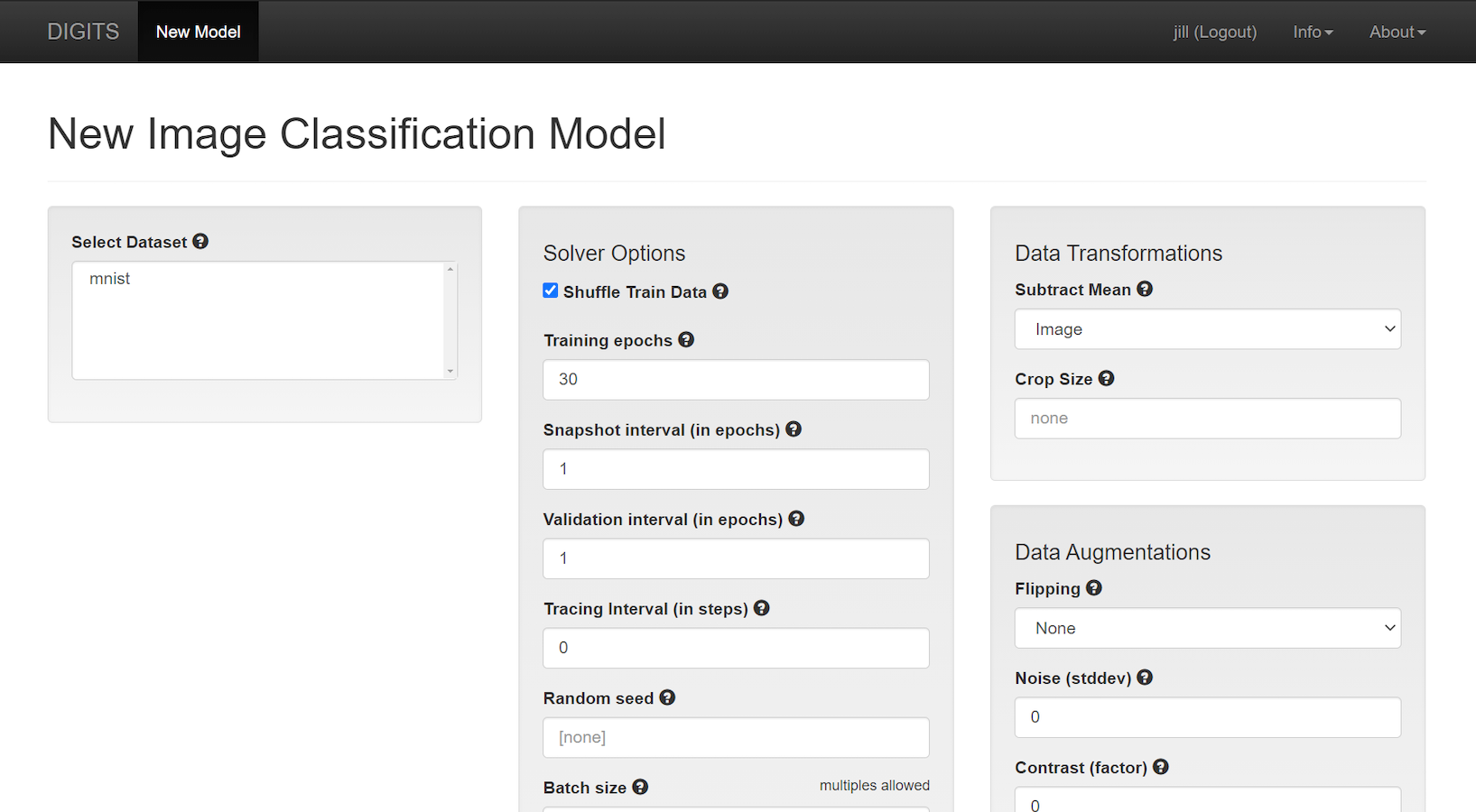 Then scroll down for Network settings, as shown in Figure 4-4, in the MNIST case choose the LeNet in the block Standard Networks. At last, click on the Create button to train the model after filling with optional Group Name and required Model Name. 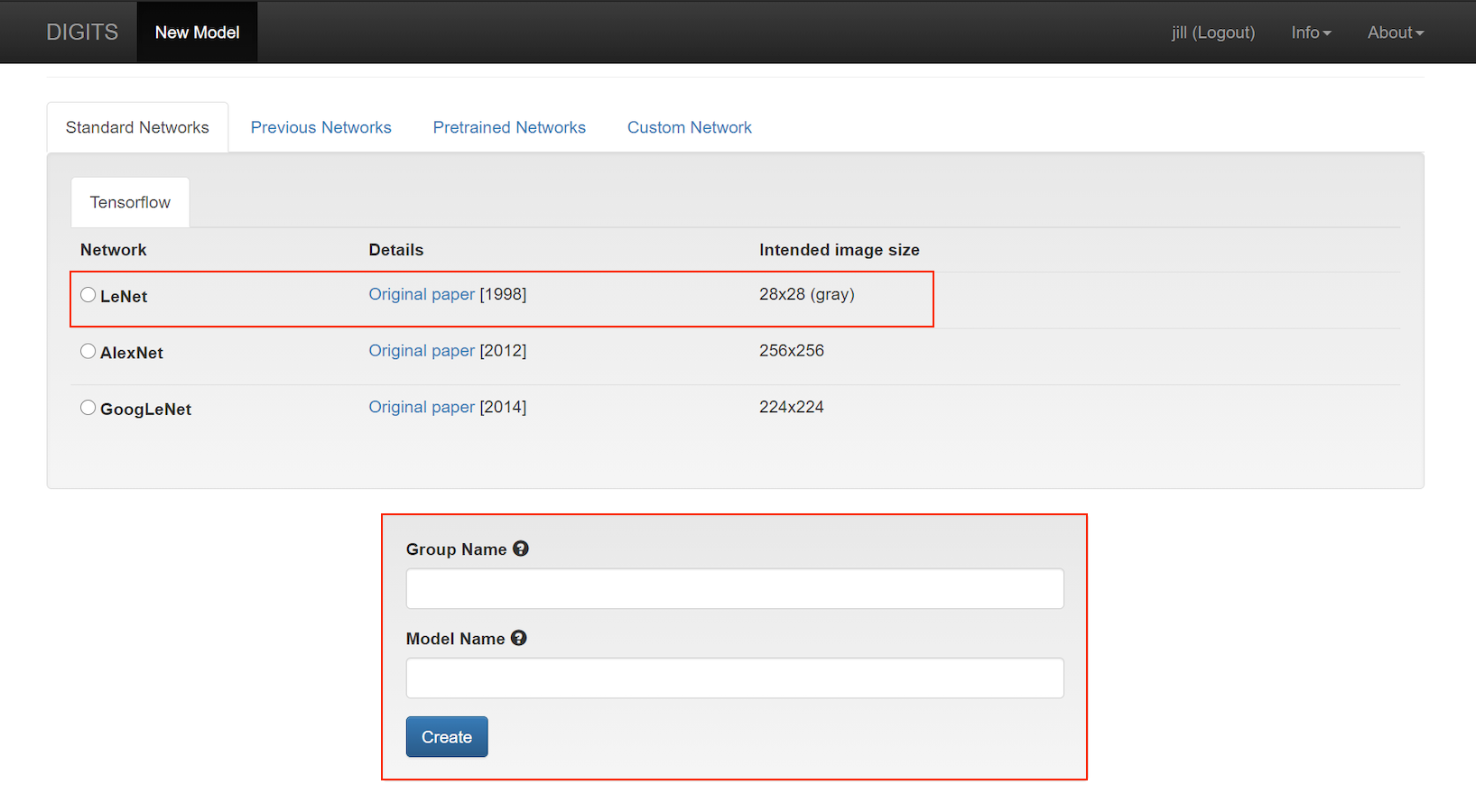 The browser turns to a new page after clicking on the Create button. Take Figure 4-5 for references, the Dataset block in the middle of the page shows the dataset information of the settings in the step2. The training status shows in the block Job Status in the right of the page. 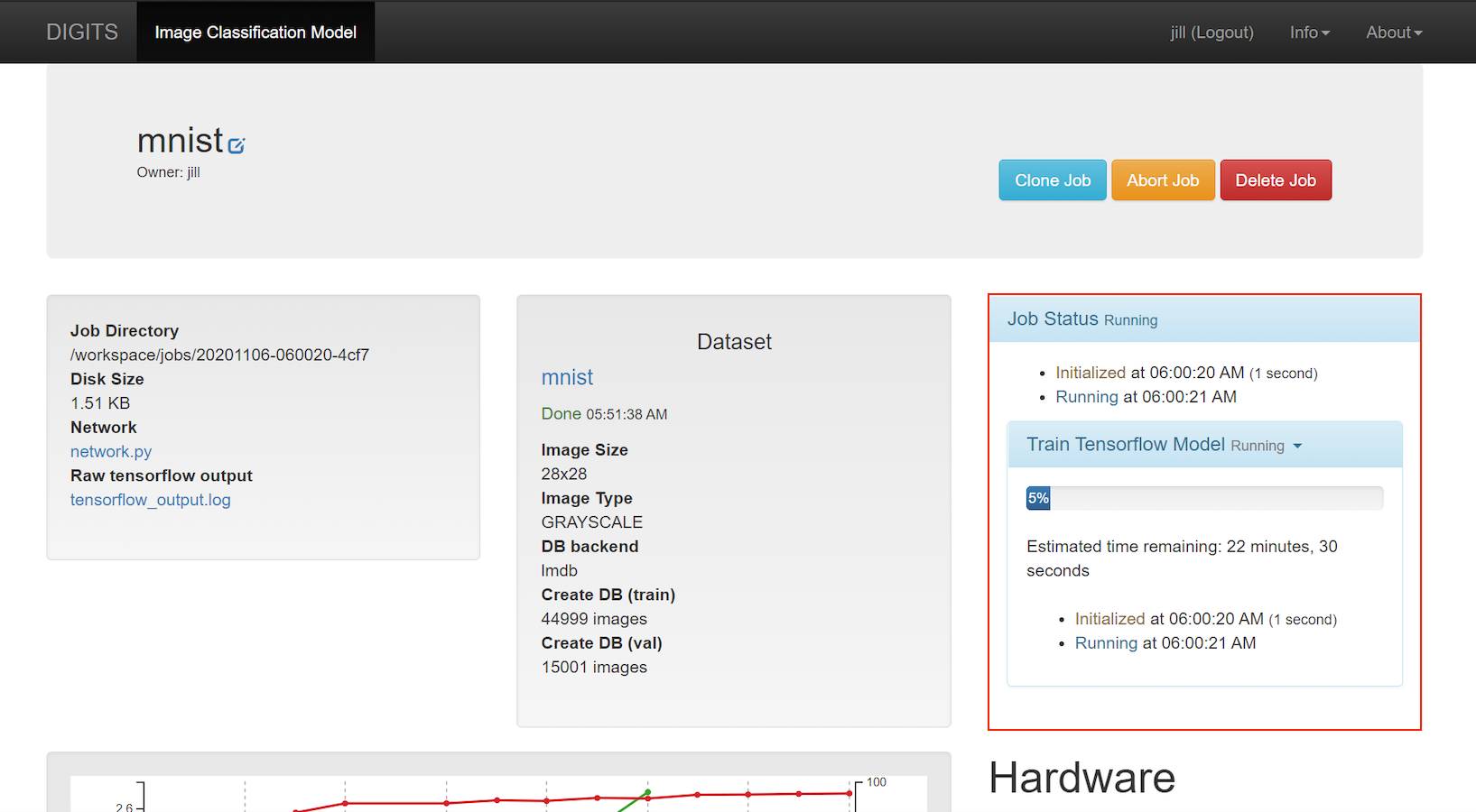 After finishing training the model, the x-axis of the below figure shows 0 to 30 epoches due to the use of the default value is 30 epoch. The accuracy and loss information of each training and validation dataset will be shown Figure 4-6. 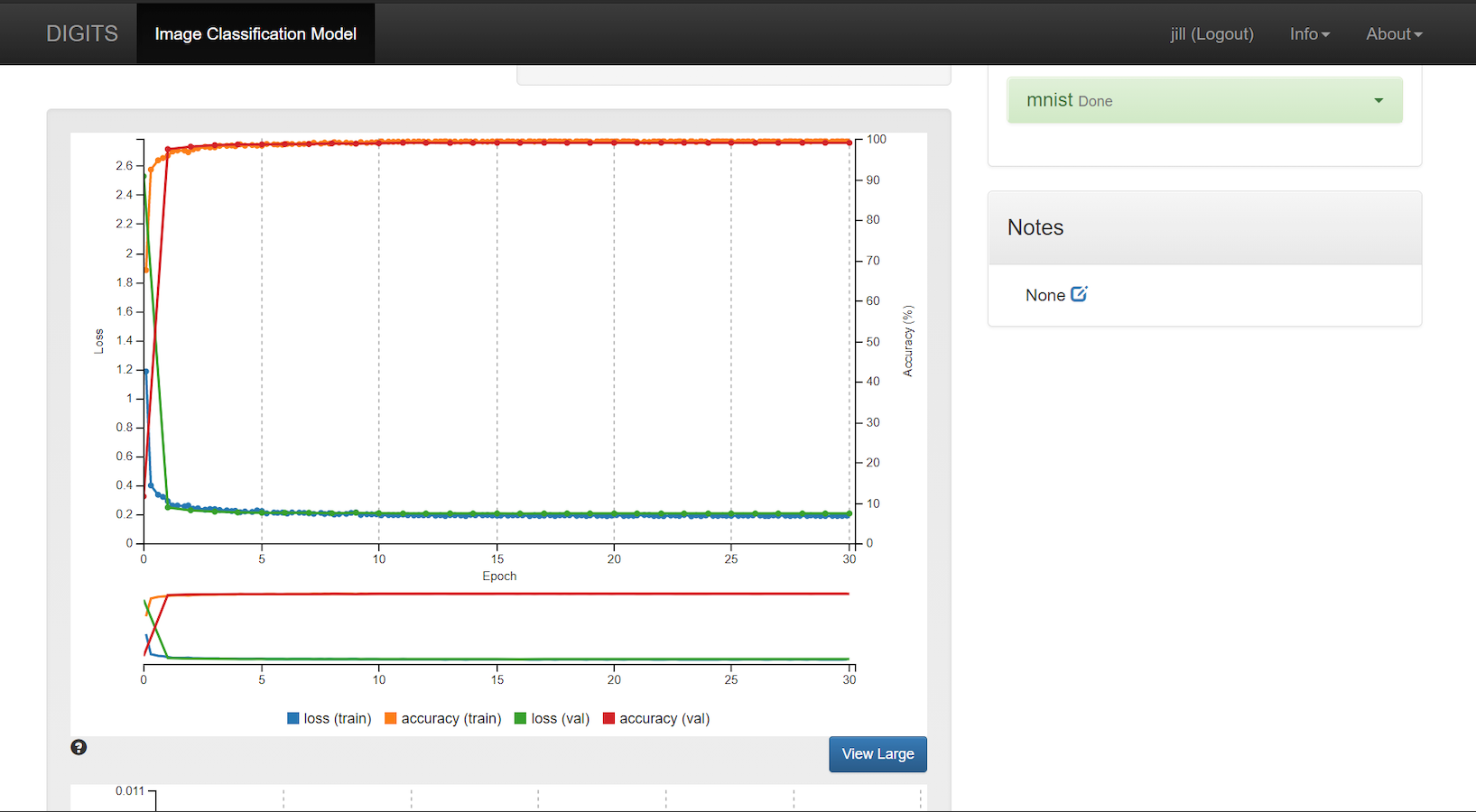 The learning rate information also shows in the below figure, take Figure 4-7 for references. 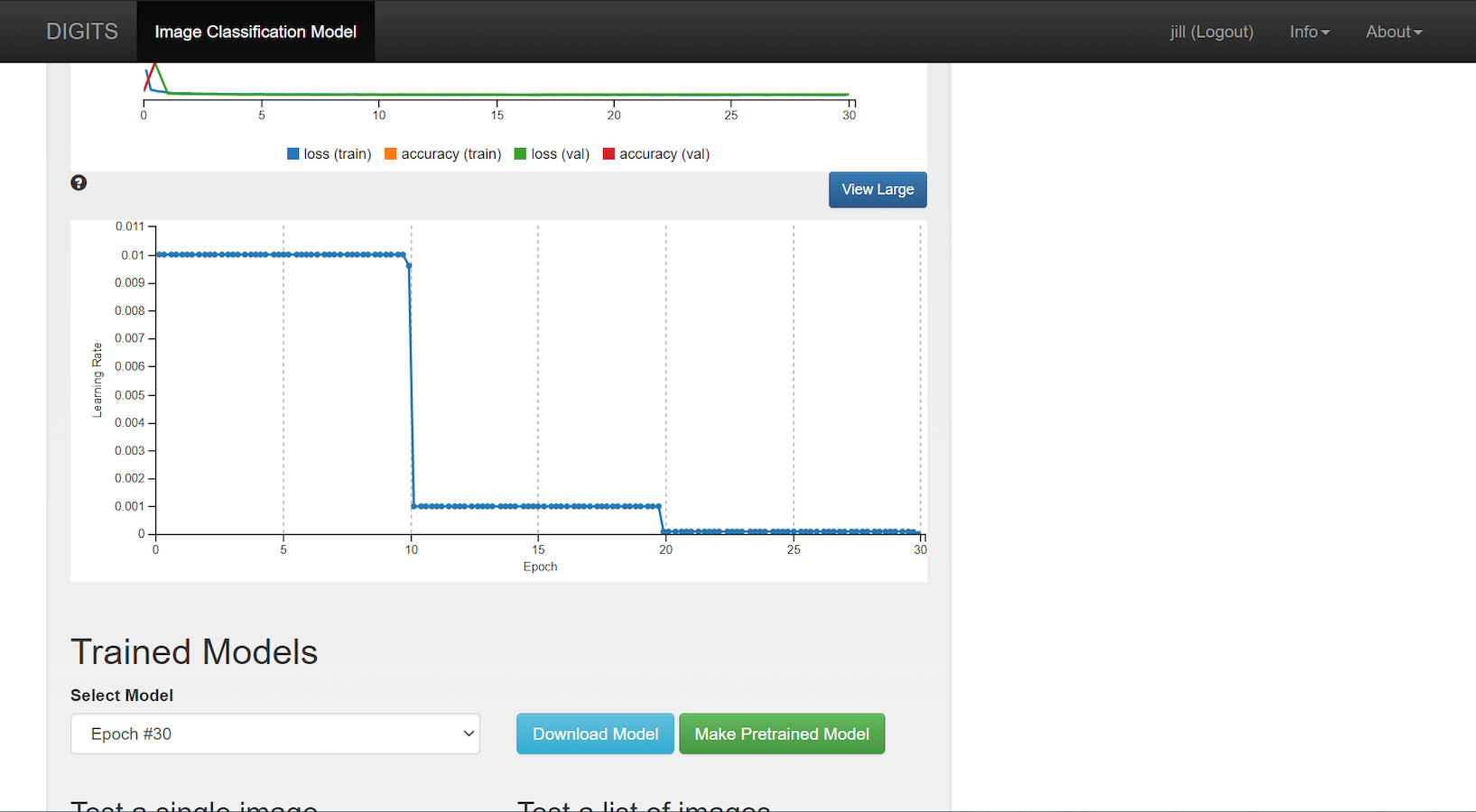 Scroll down to the same page of the trained model, the block Trained Models will be shown as Figure 5-1. 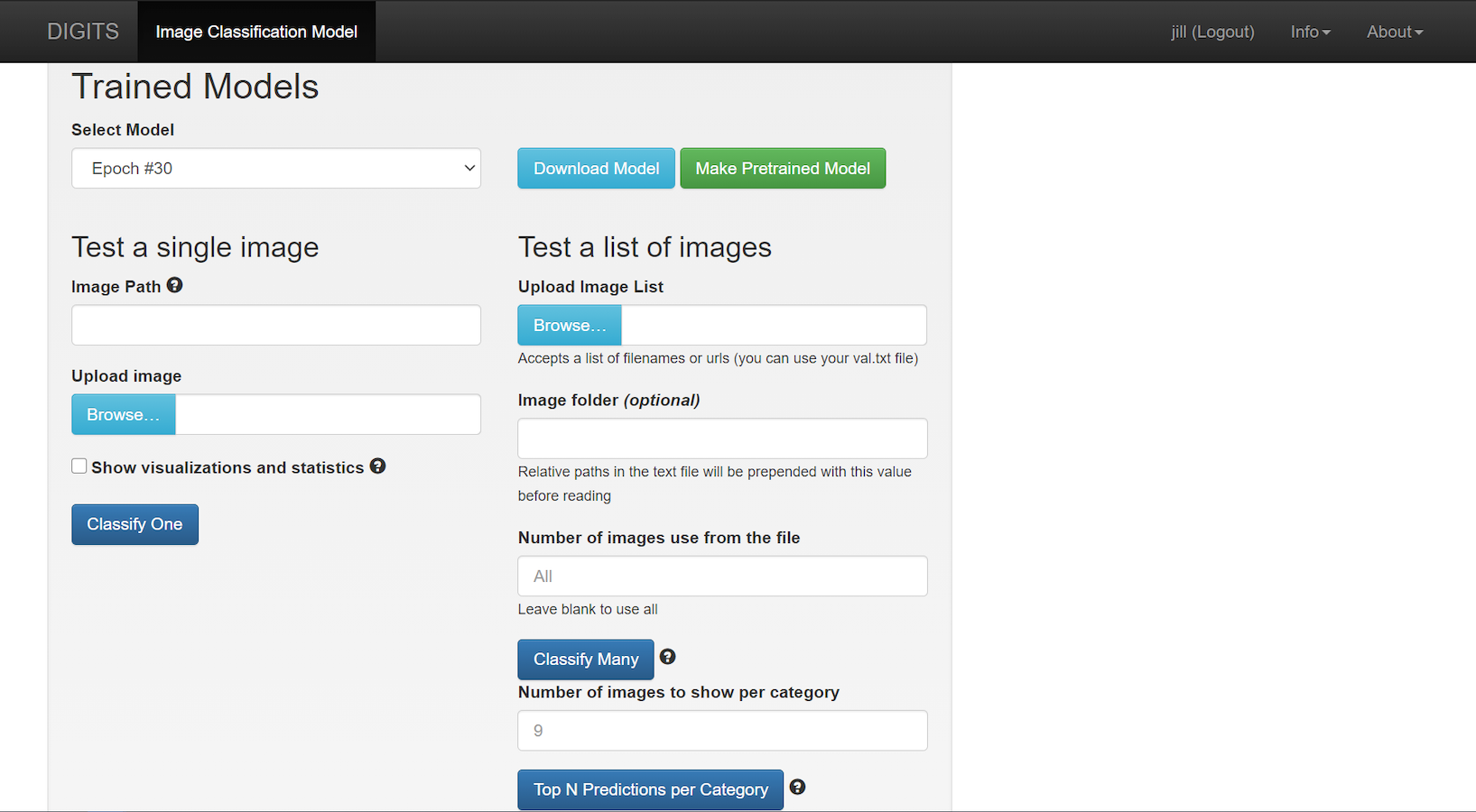 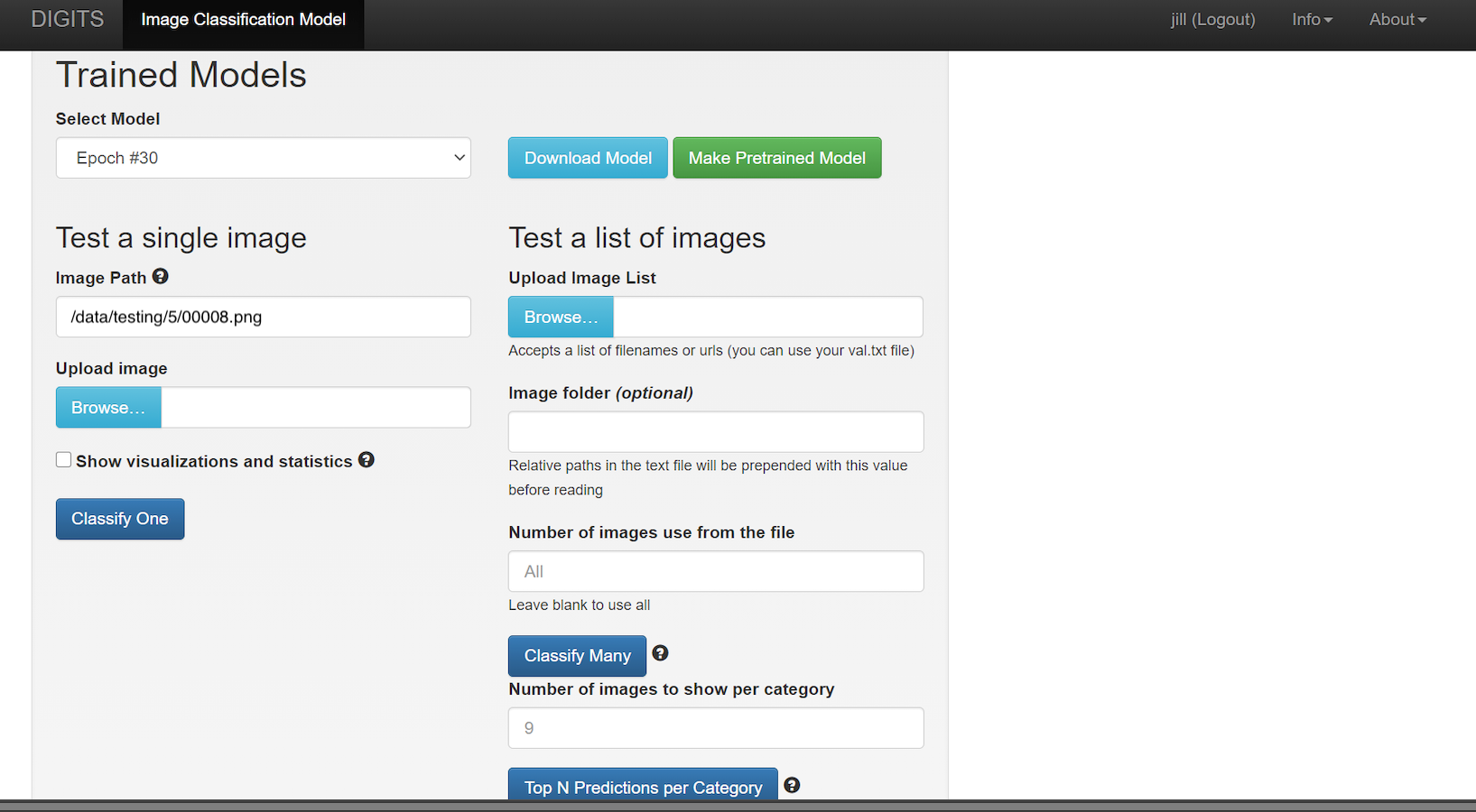 The browser turns to the result page after clicking on the Classify One button, the test image displays on the left of the page. The table next to the test image shows the prediction results with the percentage of the first 5 possible classes. The ground truth of the test image is 5, as shown in Figure 5-3, the possible classes are 5, 6, 8, 9 and 2, the corresponding percentages are 99.99%, 0.01%, 0%, 0% and 0% respectively. 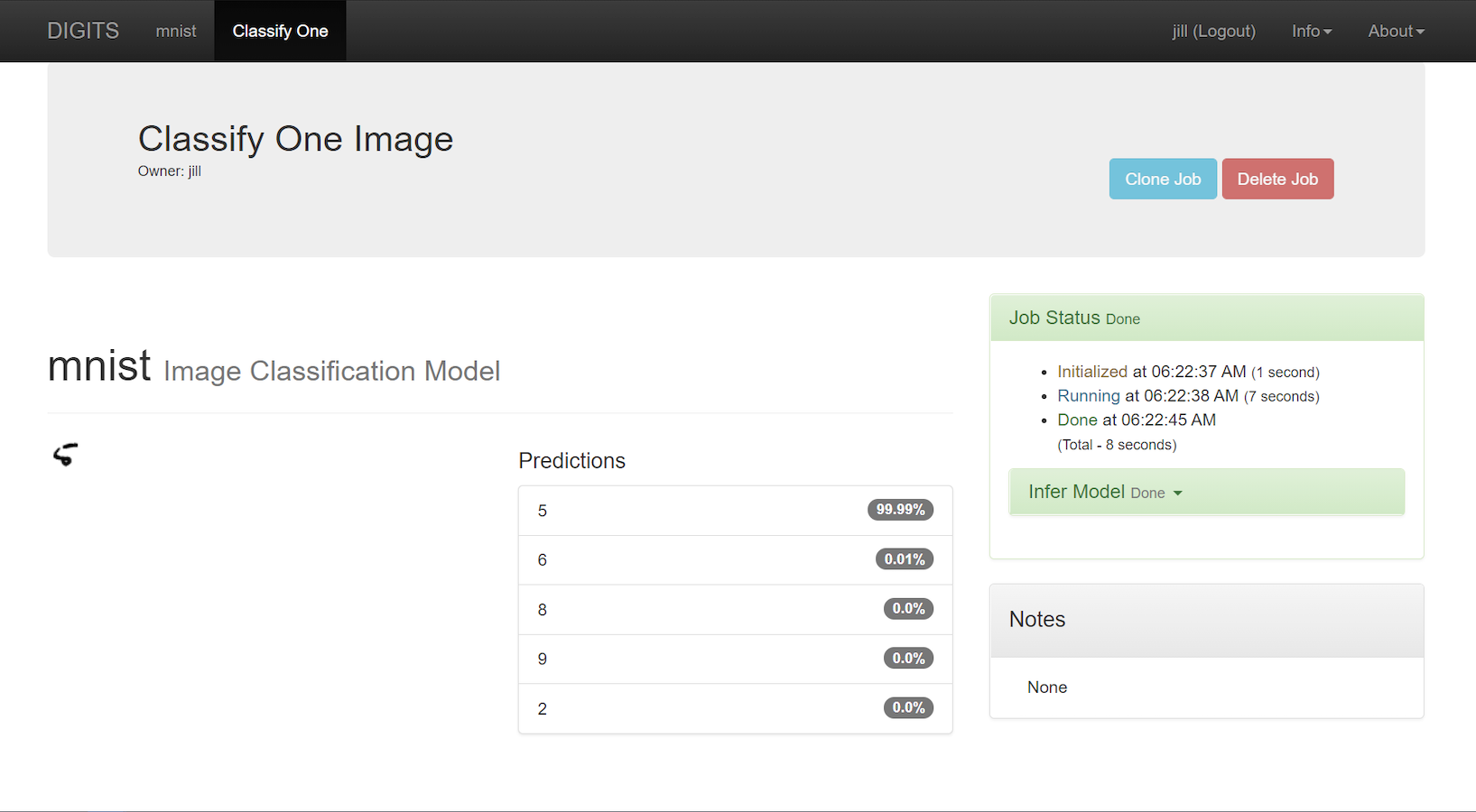 Another way to classify one image is to upload the image from your own computer. To choose the model you want to test as the same we do in the above. Click on the Browse button under Upload image to choose the test image. To start the test by clicking on the Classify One button.

Check on the Show visualization and statistics option above the Classify button as Figure 5-4 additionally, the analysis information of the prediction will also  display in the result page. 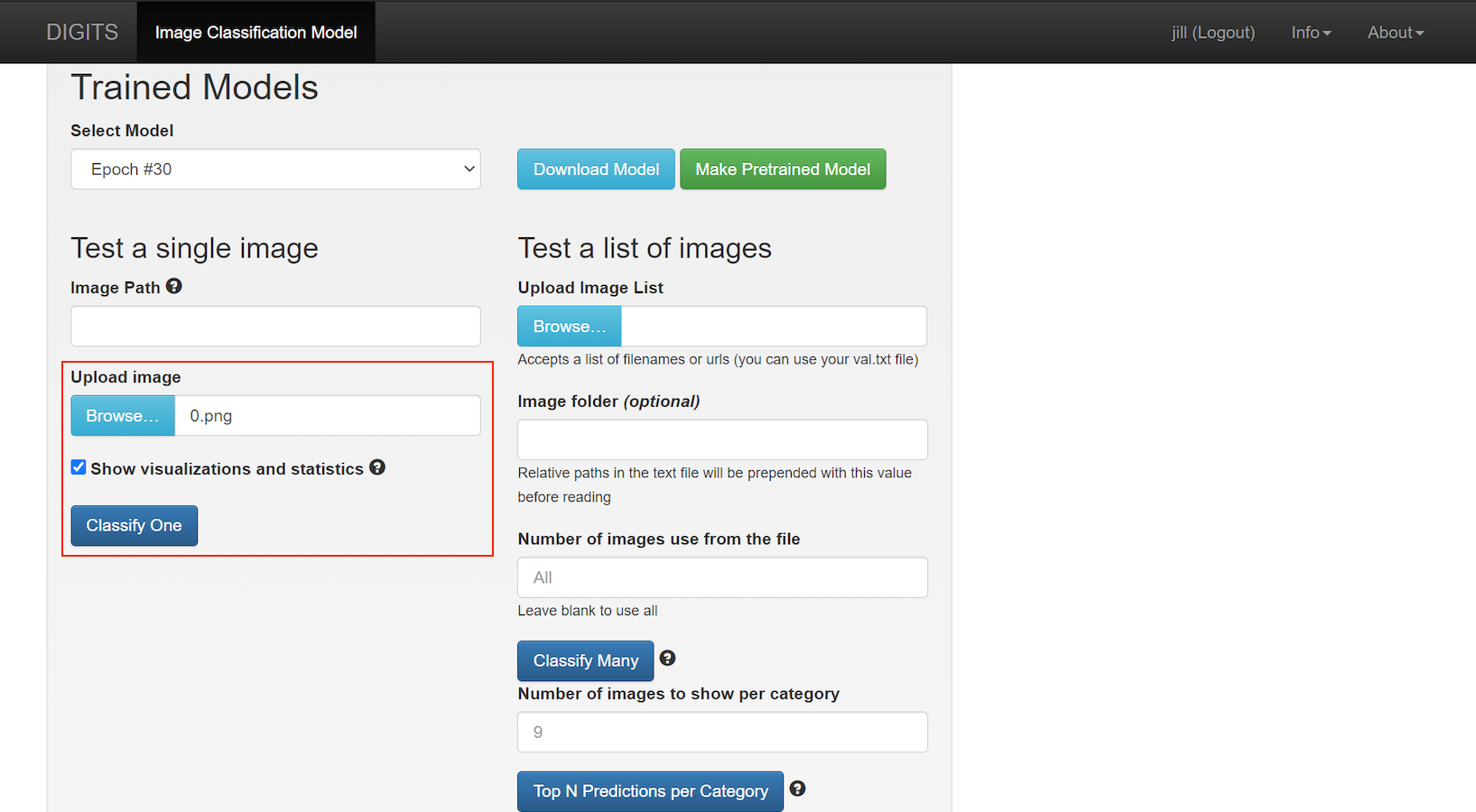 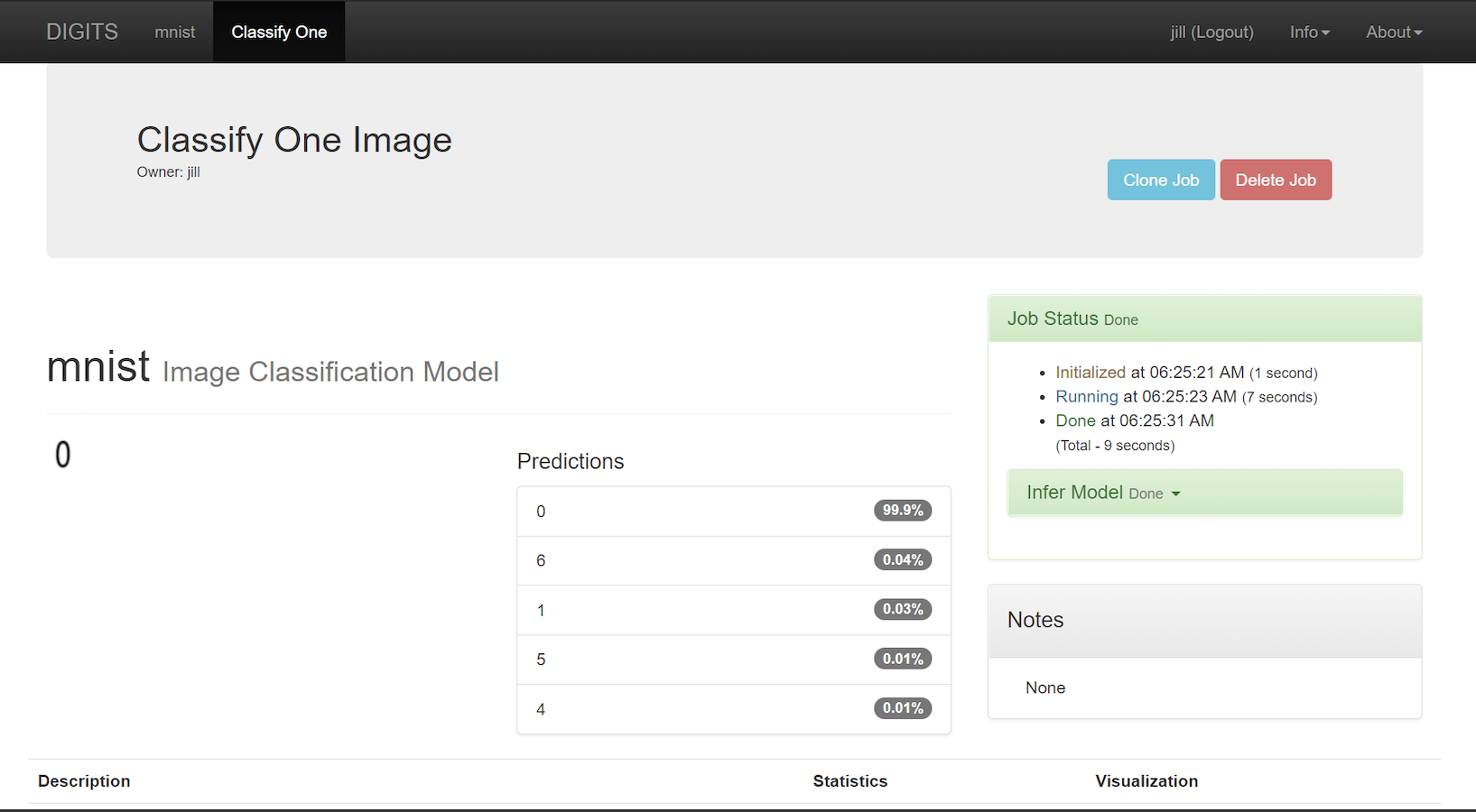 Due to the Show visualization and statistics has been checked, as shown in Figure 5-6, the analysis information of the predictions also display in the same page below. 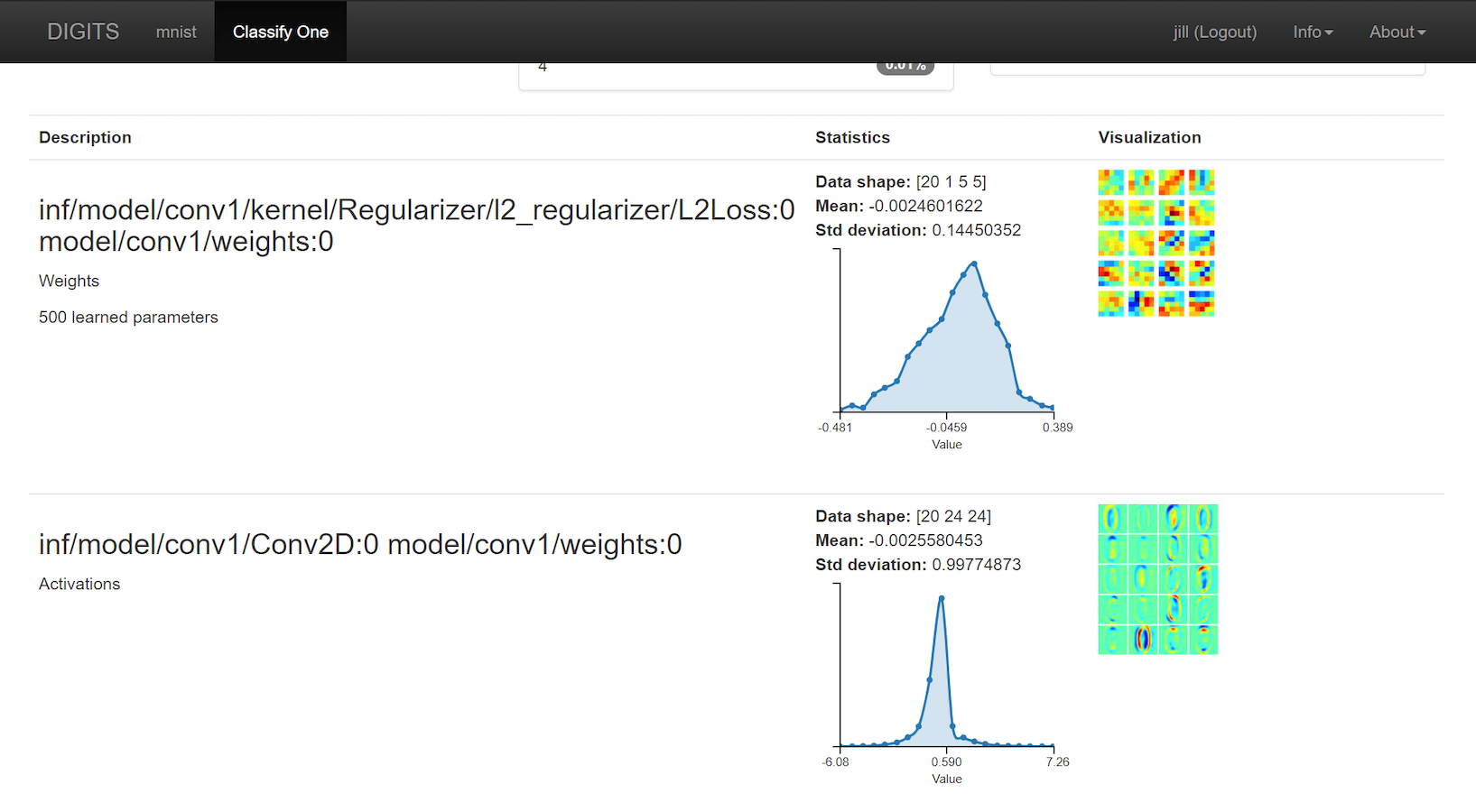 To classify multiple images in the right side of the Trained Models block. The files named train.txt and val.txt have been downloaded for the use of testing that is mentioned in the step 3 of chapter Load dataset. val.txt will be taken as an example in the following chapter, as shown in Figure 5-7. Click on the Browse below the Upload Image List in the Test a list of images block, then clicking on the Classify Many button after choosing the val.txt. 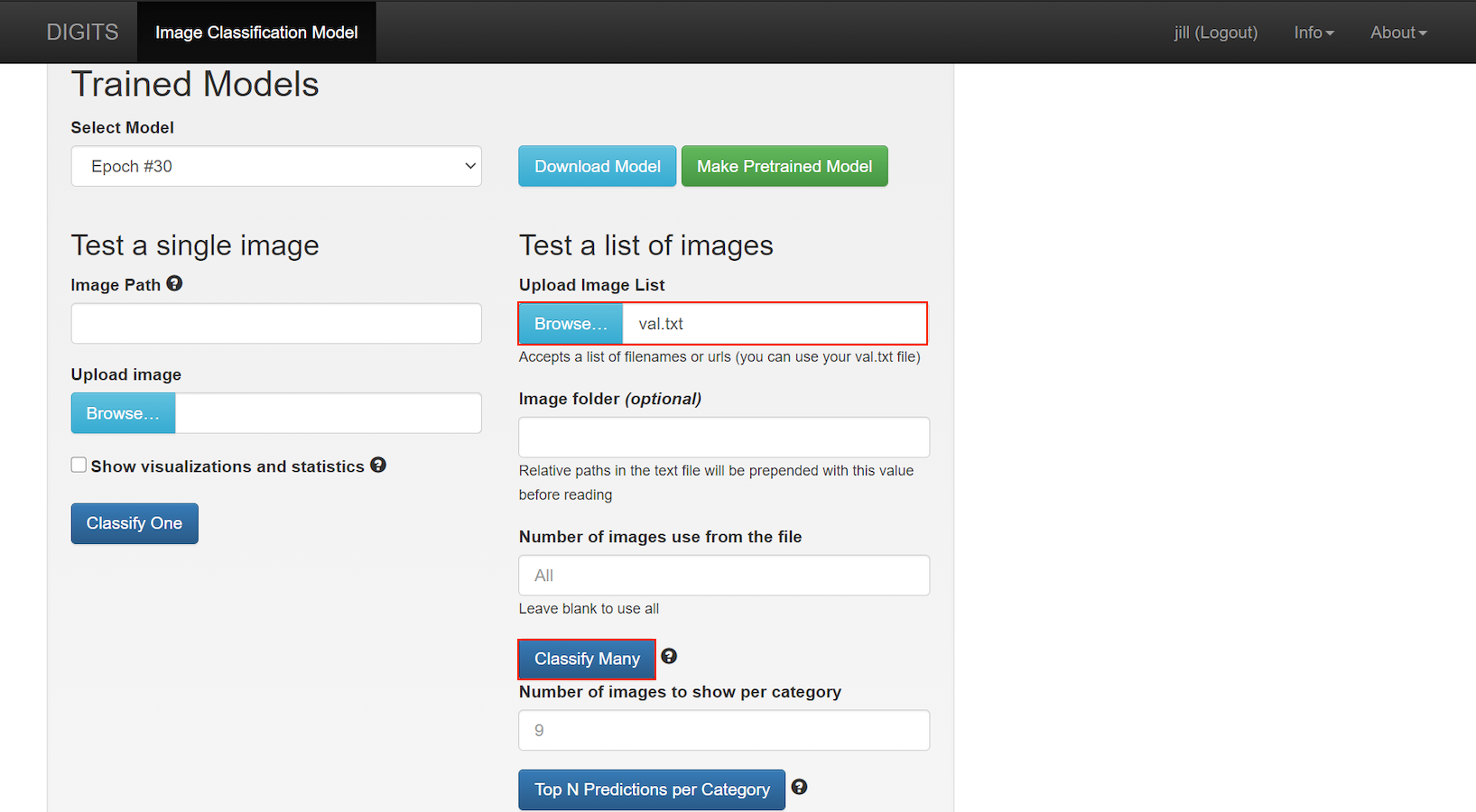 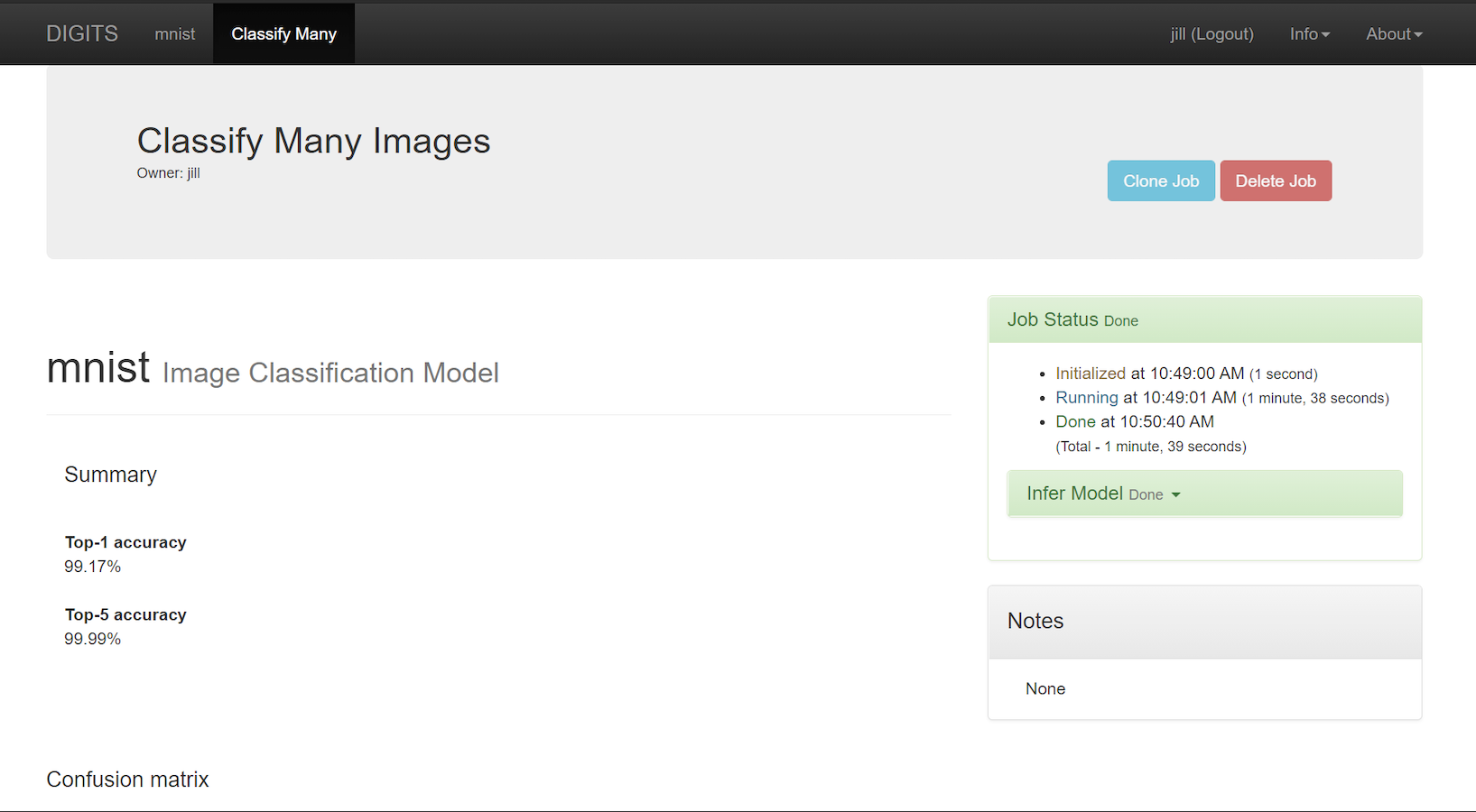 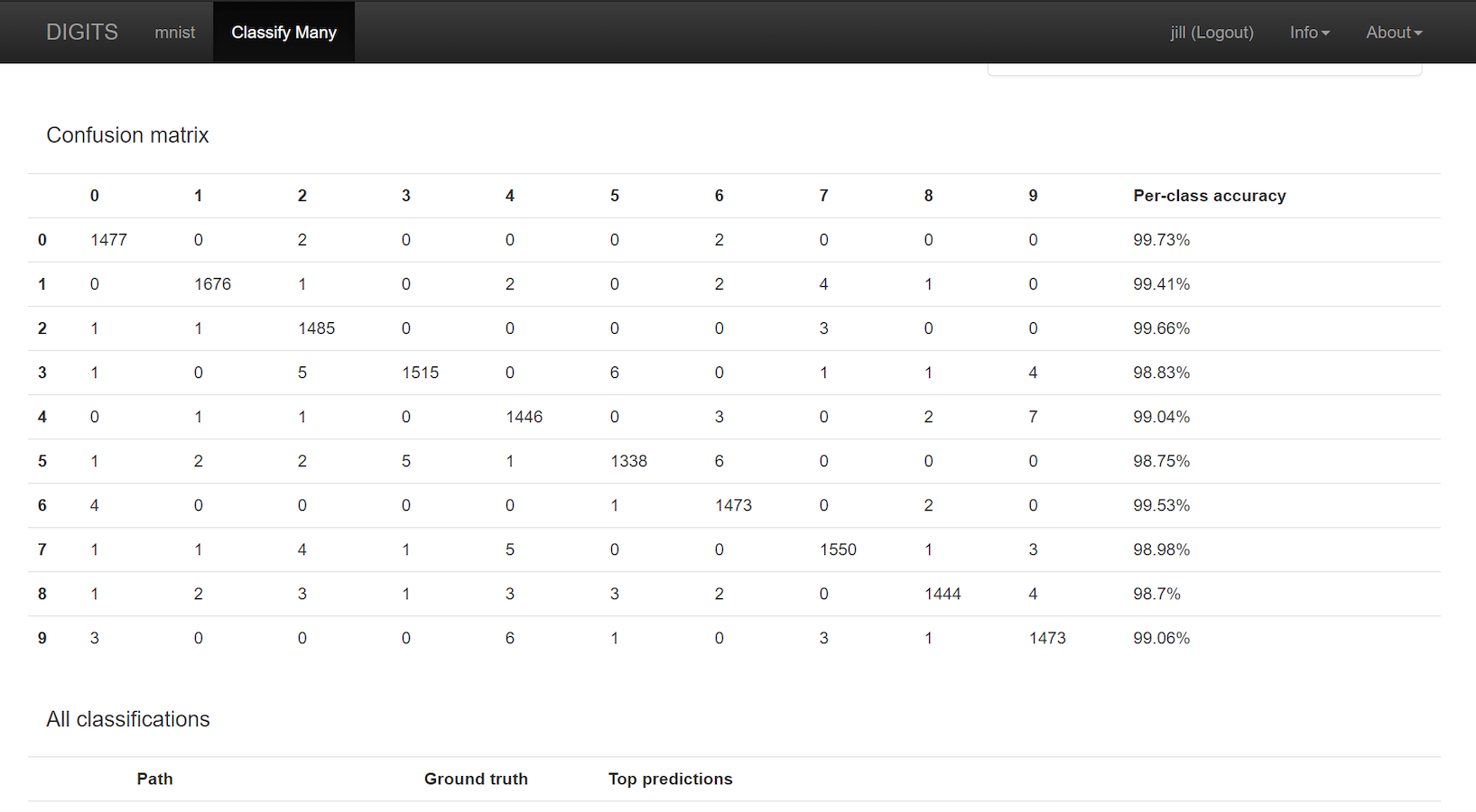 In the bottom of the page lists the first 5 prediction results for each of the images in the val.txt, as shown in Figure 5-10. 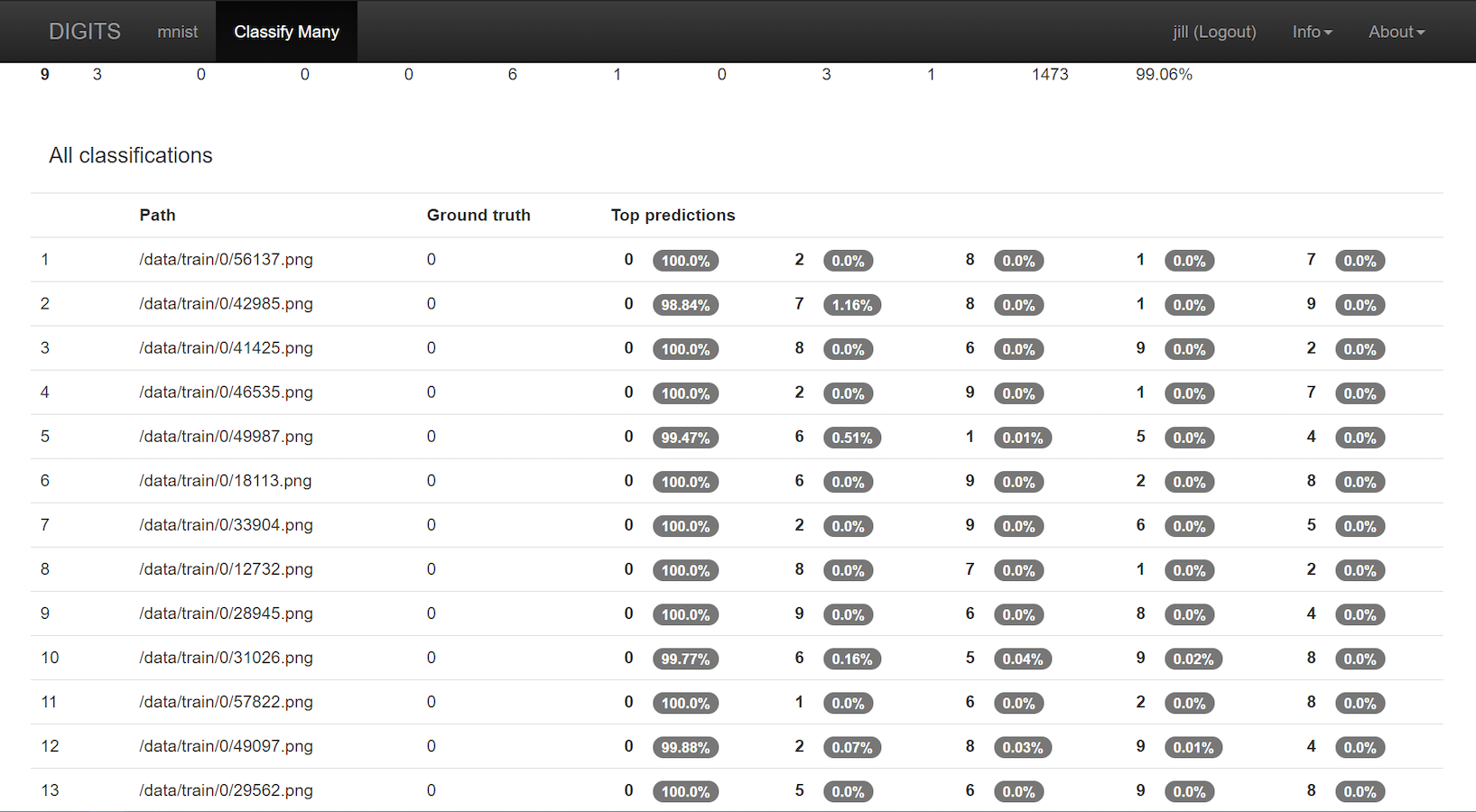